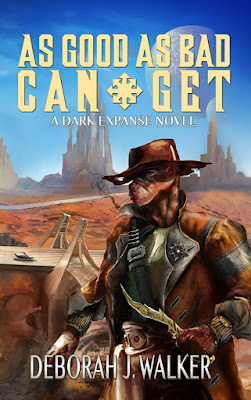 I'm so happy to announce that my book has been officially released.

Klyve Ganthe is a Kyoti, a race of liars, tricksters and con artists. As the Corona Corporation abandons the planet Nimbas, suddenly Klyve finds himself in charge. Armed with his wits, a telepathic advisor, and a nagging mother-in-law, Klyve must struggle to bring together the disgruntled factions and keep Nimbas from being overrun by the Logorasch swarm.

A planet on the edge of chaos. Can Klyve make Nimbas As Good as Bad Can Get?

The book is available in print and as an ebook at the following places.