What I Sold in October

Well the month ain't over, but I've got blog guilt, so let's have a hoorah to the nice peeps who have bought stuff off me. 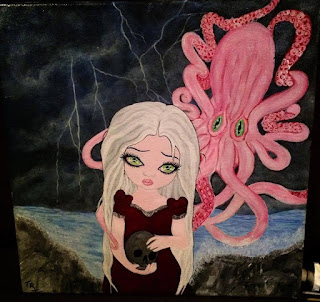 'Beyond the Turning Orrery' reprint accepted by Fantasy Scroll and to be podcast
'Pure and Without Savour' (reprint) accepted by The Sockdolager and to be 'zined
'We Ride the Stillness' accepted by Grendelsong*
'Good For Something' Estonian translation published in Algernon
'Dolly Bone Dream' (poem) accepted by Forever Hungry anthology
'Fungal Nights, Interesting' 'Bird Beak Man' and 'Under Hunter's Moon' three poems by Kelda accepted by Zen of the Dead anthology

So, I call that ten. I count everything. So I'm counting Fantasy Scroll and The Sockdolager as two each. .
Not too shabby. I wonder if I'll snag any more before the end of month. My submissions are looking dangerously low. Must make more.

Edit: 30th October and  'Glory Be to the Fake Somebody' has been accepted by Zoetic Press

*regarding Grendelsong's guidelines. I haven't seen any publicly available yet. Sorry. I found out about it through a FB post from Paul Jessop. Maybe you could, too.

Whispers From The Abyss 2 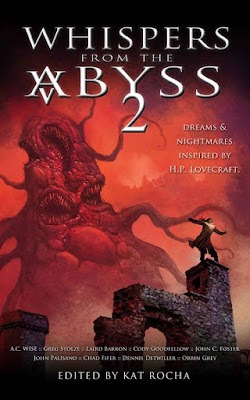 Whispers From The Abyss 2 has been unleashed into the world. Great cover candy! My story 'Baby Rhyme Time' is in here.
on October 06, 2015 3 comments:

Getting the Word Out: Clash of the Titles

There's a new anthology of science fiction, fantasy and horror edited by Gil Bavel in development. And I'm part of it.
It's a unique idea: a community of writers were invited to claimed a title from a list and write a short story, commentary or poem. New writers are rubbing shoulders with the old hands. Here's a taster of the table of contents:
Paul Levinson—Slipping Time
Mike Resnick—Fastest Dragon
Alex Shvartsman—Blood Drive
Bob Vardeman—Mach 5 —
Jaimie Earnhart—Making the Grade
Keith Graham—Into Her Own
James Stegall —Down and Out in Paris, Texas
Hope Erica Shultz—I’ve got a Black Hole in Aisle 9—
Deborah Walker (as Kelda Crich)—Night of the Vrykolakas
David Gerrold—Commentary

Clash of the Titles will be published in time for Worldcon 2016. Watch out for the kickstarter coming soon.
on October 02, 2015 1 comment: