The End of the World

Allison Morris sent me this great graphic about the end of the world. Eschatology is a fascinating subject. I think it's a window onto other culture's world views. And also reflects something eternal in the human psyche.
My favourite is The Great Disappointment, solely for the perfect naming:
It's a popular topic for science fiction writers. The Mammoth Book of Apocalyptic SF is a good read, if you're interested in a fictional take.
What about you dear readers? End of the world or you pro or nay? Is it a subject that you've tackled?

Attribution to OnlinePsychologyDegree.net
on January 28, 2013 13 comments:

Hello, all you writers out there. Deborah has been generous enough to  offer a guest post about the exciting new project that we launched  this week--The Submission Grinder 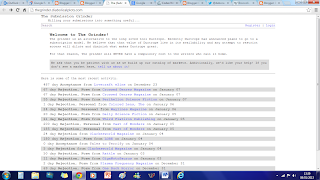 We know it has a violent  sounding name, but we wanted something that would fit in at the lab ofthe mad scientist who graces our Diabolical Plots web page.

The site is certainly a work in progress. It meets Duotrope's basic  functionality, and we're working to fix bugs and add new features. We  have a submission tracker that is fully functional, and market listings that show response time statistics based on all those entries submitted that are dated within the last year. We have committed to never charging a compulsory subscription fee because we believe that's where Duotrope went wrong. What has really set Duotrope apart is the submissions statistics, and we believe that charging a subscription will drive away that most valuable asset.

We have donations and Kickstarter campaign in mind for the future, but rather than start with a request for money, we wanted to start by providing a usable product, and then if you like what we have done then we can talk about donations then. We have succeeded in our goals of being the first working replacement for Duotrope, which is an effort we are very proud of, putting work in over the 2012 holiday
season to get this done.

Go, check out the site! If you like what we're doing, you can help out right now by doing these things:

And thanks, Deborah, for providing this space to talk about this!
--David Steffen
on January 13, 2013 10 comments:

Deborah Walker is a writer, poet, all-around neat person and a friend of mine.

That’s not really fair. But I did specifically consider heavy usage of the site and how that would affect the running costs. That’s why all the resource-hungry functions (for example, the way I frantically
refresh keep up-to-date with recent market responses) are all part of the pay-for service. That keeps the site safe from becoming a victim of its own success as the more people who want options means the more
people who are helping to cover the running costs. 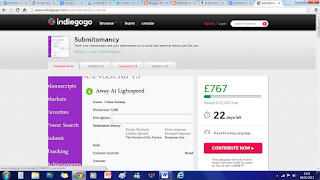 But I know that Deborah is saner than I am, at least when it comes to obsessing over responses. So the next consideration came from a different angle:

"How would I get Deborah to use this? How would I make it worth her money to subscribe?"

And that is a lot more interesting to look at.

First of all, the system needs to not slow her down. It has to be fast and easy to fill in the details for each manuscript. The power search has to load her criteria at the click of a button. And tracking each
submission has to be quick so she can move onto the next. It isn’t enough for the system to make it easier, it has to make it faster.

Second, I needed to consider pen names. Deborah Walker is also Kelda Crich and when she’s looking at her submissions, she needs to be able to track which submissions and sales were Kelda’s, without having to
pretend to be two people. Now obviously I am not going to try to track every possible piece of data that a writer might find important, that would be crazy. But it is easy to add a custom field per manuscript, which writers can use to track certain keywords. So Deborah can simply mark those stories as Kelda and when she’s looking at her results, she filters by that field. Now she’s got her submission responses nicely split between names.

Which brings me to the third point: stats. Deborah and I both geek out over numbers and I know that if I promise reports, she’ll fill out the forms. At the end of the year, I want her to be able to play with the
results and see not just her her sales but her total submissions, break-downs of her favorite markets and the types of responses received.
I want her to be able to see, at a glance, which types of stories are getting the most personal responses, maybe by genre or word count or even gender of the protaganist. And I think she’d be really interested
in market reports that showed actual stats for the stories accepted with similar breakdowns.

If there’s enough interest in Submitomancy then I’ll be looking at reporting options more seriously in February, along with the Early Access subscribers. But reports are only as good as the data that goes
into them and the data is only useful if there is a critical mass of users. That’s why I’ve put Submitomancy up as an Indiegogo campaign. Subscribing now gives a discount on membership but it also will prove, if successful, that enough users plan to use the service to make it useful.

That’s why I’m asking writers to show their support now. If you think Submitomancy would offer a service that you would like, or even if you just want to help Deborah double her submission rate next year, then please support the campaign and tell your friends.