The Rebirth of Mr Scratchy Claws

I'm pleased to announced my story 'The Rebirth of Mr Scratchy Claws' has been published in Lazarus Risen. 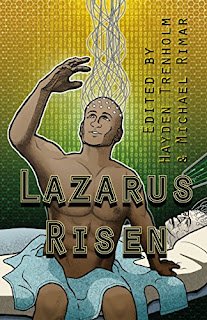 Dreams of immortality and eternal youth are almost as old as human culture itself. But what would the world look like if everyone could live and be young forever? What would it look like if only some of us had that privilege? Lazarus Risen presents sixteen stories from around the world that explore the economic, political, social and psychological consequences of life extension, human cloning, the hard upload and other forms of the biological singularity. Stories by Brent Nichols, Sean McMullen, Teri Babcock, Nancy SM Waldman, Brad C. Anderson, Fiona Moore, Felice Picano, Matthew Shean, Matt Moore, Suzanne Church, Peter Wendt, Holly Schofield, Deborah Walker, Kevin Edwin Stadt, Leigh Kimmel, and Andrew Barton
on September 19, 2016 2 comments:

Kyu, The Unknown: A Book Birthday

I am so pleased to have Paul Magnan on my blog to talk about his debut novel, 'Kyu, The Unknown' I first met Paul when I was a wide-eyed newbie, and since then I've followed his career with great interest. And now a  novel! A storty decades in the making. Bravo, Paul! 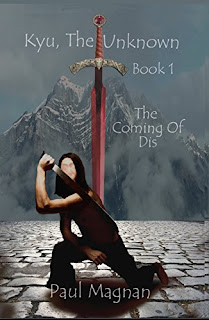 First off, I want to thank Deborah for her invitation to post on her blog. It is appreciated.

Anyway, on to my debut novel, "Kyu, The Unknown, Book 1: The Coming of Dis", released on the 9th of September by the wonderful people at Writers AMuse Me Publishing, who publish an eclectic variety of books, many of them award winners.

In a nutshell: Kyu is a famous and popular arena fighter in a world that has a few traditional fantasy elements, but has been allowed to evolve technologically (While I enjoy straight-up fantasy stories, I never understood how technological advances never happened in them. Sure, they have "magic", but 3000 or more years with no basic inventions even considered, like a printing press or even firearms? I could never buy that, so I made sure my book didn't have that issue).  Kyu's world is a mega-continent called the Territories, the last human land on a planet almost completely engulfed by the Disian Curtain. Behind the Curtain are creatures called Infernals, ruled by Diaboli Domini, who not only want, but need, to feed on human souls. And the Curtain is creeping ever closer to the human land.

The humans, sadly true to form, are ignoring this greater threat to plot among themselves, split between political and religious differences. Kyu discovers he has a connection to both realities, and, with a determined but novice politician named Erenia, must convince the population of the Territories to band together, militarily and spiritually, to fight off the coming invasion, or lose everything forever.

"Kyu" is not a recent idea of mine. Actually, he's been with me under one form/name or another since 1980. He didn't even start out as prose. He came into being as a comic strip character I created as part of a project for my high school art class. I drew him as wearing a heavy black cloak, with his face hidden inside the darkness of a hood. As now, he had claws for hands and was an arena fighter.

His name then was The Unknown Flurg, and he was an instant hit with my classmates, who encouraged me to create more strips. My teacher, though appreciative of my efforts, thought Flurg was a bit too violent, which was undoubtedly true.

I had already written a few basic stories at this stage, so it wasn't exactly a giant leap of logic to start writing instead of drawing Flurg. When I graduated in 1981, I still hadn't finished this novel-in-the-making. Next to my picture in my high school yearbook is the message "To those who knew him, remember the Unknown Flurg; to those who didn't, well, perhaps you'll read his story in the future."

Thirty-five years later, with his name changed for a variety of reasons, they now have that chance.

It took three years for me to finish that first novel. It was rough and undisciplined, to be sure, but I think it had a certain charm, and many of the main characters (who also have undergone a lot of changes since then) in the present novel were introduced.

Then I took a twenty year hiatus.

Why? It's hard to say. I just put my life on cruise-control, pushing past things I should have dealt with, but didn't. I went to work after high school in a factory, and didn't go to college until two years later, and even then it was part-time. Eventually I earned a Bachelor degree in Marketing, which collects dust to this day. Maybe it was because I was told by more than one person that pursuing a degree in English was worthless unless I wanted to become an English teacher, which I knew I didn't want to be. Maybe it was because I was told that fiction writing was a thankless, barren field, where to make a name for oneself was almost impossible. Maybe it was nascent depression, which has plagued me most of my life, making itself at home and comfortable within me, encouraging self-doubt and apathy to come in as roommates.

Then, around 2005 or so, I lost a lot of weight and my creativity came back. I started writing short fiction. I made like-minded friends on the Internet, who helped teach me how to write. And I looked back on Flurg and brainstormed. And brainstormed. And brainstormed again. I started making notes, building the world in which he lives, making changes to him and other characters, and introducing new characters, main ones of importance. A year later I had a rough, 120,000-word manuscript. I dove right back in and wrote two sequels of similar length.

Then I took another hiatus, but this time it was to polish my craft with short stories and learn from the critiques of various established authors I had met and befriended in various writing forums. Over the next couple of years I worked at my craft, and started to sell stories to non-paying and token-paying venues, working my way up to semi-pro and pro markets.

I turned back to Flurg. I did a ton of editing, slashing away several thousand words. Once I felt it looked halfway decent I looked into independent publishers, as I had no luck in finding an agent.

Writers AMuse Me Publishing is the brainchild of someone who runs a fantastic writing forum called The Writers Block. Her name is Mary, and she accepted my book.

Then we went to work...and work...and work...and more work. Mary and her team were instrumental in knocking away much that was unneeded and inhibiting in the book, teaching me so much as we went along. She sent back chapters with a LOT of red to be acted upon. There were times when I wanted to run and hide. I persevered, and after a few months of slashing and learning (on my part), and name changing (Flurg to Kyu), the novel was finally ready for publication, and here it is. It is also available for purchase in both Kindle and print form though Amazon and as a NOOK book through Barnes&Noble.com.

Once again, thank you, Deborah, for allowing me this opportunity to write on your blog!
#