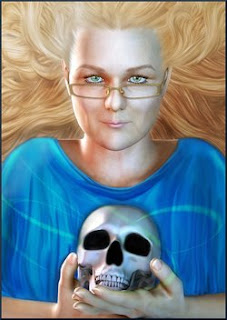 Today I welcome Rayne Hall onto my blog in a continuing series of writer's craft blog posts.

Rayne is the author of over fifty books in different genres and under different pen names, published by twelve publishers in six countries, translated into several languages.

With a sweet black cat snuggled between her arms, Rayne writes fantasy and horror fiction. She lives in a seaside town in the south of England.

I like characters with weaknesses, because they're like real people, and their flaws make the story vivid. What would Charles Dicken's tale 'A Christmas Carol' be without the sour stinginess of Scrooge, or Jane Austen's 'Pride and Prejudice' without Mr Darcy's boorish arrogance?

Unlike those dull characters who are already perfect at the novel's start, flawed heroes need to learn lessons, often difficult and painful ones. They have to wrestle their weaknesses, make harrowing choices, adapt and mature. The selfish person learns consideration, the hard-hearted one compassion, the coward courage and the miser generosity. I can grow with them, without suffering the actual anguish and embarrassment, from the comfort of my armchair.

Many novels feature the main character's journey of growth, sometimes between the lines, sometimes as the main plot.  This journey fascinates me. The character cannot begin to change until he acknowledges his weakness. When he changes, he is tested, often to the extreme.

The classic novel 'Four Feathers'   by A.E.W. Mason  is the story of a coward growing and redeeming himself. Henry Feversham (spelled “Faversham” in some movie versions) is afraid of fighting in a war, and also frightened to admit to his father that he doesn't want to follow the family tradition of becoming an army officer. About to be sent into battle, he resigns his commission. Shunned for cowardice by his family, his friends and his fiancée, he redeems himself with acts of courage in the face of dangers and hardships far greater than those he had sought to avoid.

'The Kite Runner' is also the story of a coward who grows and redeems himself.  As a young boy, Amir failed his friend, witnessing him being raped rather than coming to his aid. Shamed by his cowardice, he frames his friend for a crime, so he would not constantly be reminded of his shameful cowardice. When he realises the full extent of his betrayal and seeks to make amends, it's too late: Hassan is dead. Then a situation opens up which replicates what had happened in childhood, but on a much larger scale. The danger and suffering he must undergo to rescue Hassan's son from the clutches of a Taliban paedophile are so great that few humans could bear them, but he is determined to do what it takes. As readers, we root for him that this time he'll get it right.

The character needs to find the will to change within himself, but another person's love and trust is often the catalyst. Especially rewarding are the stories in which the love of a good woman gives a flawed man the courage to change. In real life, bad men seldom change, and they often drag the good woman down with them. But in fiction, we can see it happen. We root for those characters and cheer for them.

In 'Storm Dancer' I matched two flawed characters, Dahoud and Merida, each with their own growth journey and lessons to learn.

Dahoud is a troubled hero with a dark past. As a siege commander, he once razed, raped and killed... and he enjoyed it. Now he needs to atone. He has sacrificed everything to build a new identity and a life of peace, and he devotes himself to protecting women from harm. But Dahoud is not alone. Inside him lives a devious demon, a djinn that demands he subdue women with force. It torments him with pains and tempts him with forbidden desires. How much of it is the demon, and how much is the dark psyche? How can he learn to control the evil inside him? How far must he go to redeem himself?

Merida lives by firm principles, values and rules, and seeks to convert others. Imprisoned in a sadistic ruler's harem, where her definitions of right and wrong no longer apply, she needs to rethink her values. Which principles will she hold on to, and which ones will she sacrifice?

Do you like to read about flawed heroes? If yes, what attracts you to them? Who is your favourite flawed hero in fiction?