Barsk: The Elephants' Graveyard: A Day in the Life of the Author

Today I welcome author and editor Lawrence M. Schoen onto my blog. Laurence's book Bark the Elephant's Graveyard is availalbe from good retailers. I asked Laurence what constitutes a day in the life for him.

Lawrence M. Schoen: A Day In My Writing Life
Because I’m still tied to a Day Job (albeit a very flexible one that’s only part time), I don’t have the kind of regular routine that I like to think I’d engage in if I was living the life of a full time writer. Further complicating my answer (to what appears to be a very straightforward question) is that I am commonly plagued by insomnia. Not the kind where one cannot fall asleep, mind you. I’m really good at falling asleep (the whole “self hypnosis” thing works wonders there). Rather, I wake up, usually after about two hours, rarely managing as much as four. I wake up all at once, no gradual crossing of that threshold between states of consciousness. When I awaken, that’s it; I’m alert and there’s no going back to bed. So, typically, I’ll get up and go downstairs to my home office and putter for an hour or two (or three or four) and then return to bed and try and pack in some more sleep time, ideally to bring me to a total of at least six hours.
I tell you this because whether or not I awaken in the middle of the night is going to affect my schedule for that day. If I manage to sleep through the night, then I’ll typically get up at either six or seven a.m. (bonus points to readers who know what “a.m.” stands for), tend to my  morning ablutions, and then drive to the Day Job where I am the director of research for a medical center that specializes in mental health and addiction services. I’ll work what most folks would consider a half-day, get back in my car, and drive off to find a place to have lunch and write. Usually both of these things occur at a not too distant KFC. 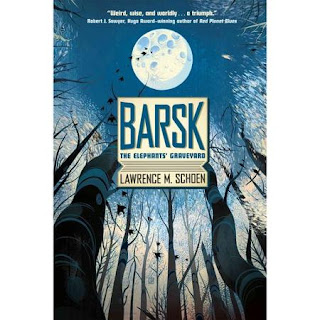 Upon arriving at the KFC, I’ll get my meal and let the other burdens of the day slip away with some pleasure reading. When I’m done eating I’ll put the book (well, technically my phone) aside, refill my beverage, and fire up my laptop. This is the formal transition time, moving from someone else’s fiction to my own by way of checking and responding to incoming email, skimming my Twitter and Facebook feeds for mentions, and then opening up the file (usually a Scrivenor document) with the current work-in-progress. Although I started my writing career as a panster, I’m very much an outliner nowadays (thank you, Walter Jon Williams). I mention this because it means that on most days the heavy-lifting portion of the writing has already been done. My outline details everything that has to happen in a given scene: what must be accomplished to move the plot forward, what bits of character development are required, and so on. Which leaves the fun part (and I mean that seriously), filling in the actual words that will accomplish all of that. Or to put it metaphorically, I have the map and now it’s time to take to the road and experience the actual trip. This is usually a joyous thing, and the words flow. Conscious awareness and unconscious intention are working hand-in-hand, putting me in “the zone” for anywhere from one to four thousand words, or an entire scene, whichever comes first. That may take an hour or several, though if I’m doing it right I won’t have much of an accurate sense of how much time has passed. At that point the part of my brain that handles creating fiction calls a halt. I’m done with that stuff (at least for a while), but not necessarily done for the day. There are probably new emails that have shown up from my publicist or editor, or from someone involved in one of the small press projects I’ve committed to, or one of the authors working on one of the projects going on at my own small press, or a query from a convention I’m attending, or something involving the Klingon language.
If it’s early enough and the weather is good, I’ll take a walk, often as not with my dog. It’s not just a good excuse for exercise but also an opportunity for me to work through ideas and dialogue, plant seeds in my own unconscious for unraveling while I’m asleep, and taking a step back from the day’s writing and going over it somewhat fresh after an hour or more away from the initial creation. Then back home to dinner with my wife, maybe an hour of TV, maybe some pleasure reading, or more time thrown at some of the previously mentioned black holes of email and far too many side projects. Which reminds me, I still have several of those to deal with today, so I should end this now. It’s a never ending cycle, but tomorrow is another day. 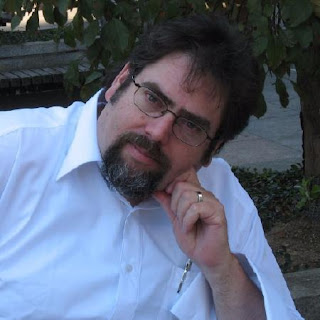 Lawrence M. Schoen holds a Ph.D. in cognitive psychology and psycholinguistics. He spent ten years as a college professor, and has done extensive research in the areas of human memory and language. This background provides a principal metaphor for his fiction. He currently works as the director of research and analytics for a series of mental health and addiction recovery facilities in Philadelphia.
He’s also one of the world’s foremost authorities on the Klingon language, and since 1992 has championed the exploration and use of this constructed tongue throughout the world. In addition, he’s the publisher behind a speculative fiction small press, Paper Golem, aimed at showcasing up-and-coming new writers as well as providing a market for novellas. And too, he performs occasionally as a hypnotherapist specializing in authors’ issues.
In 2007, he was a finalist for the John W. Campbell Award for Best New Writer. He received a Hugo Award nomination for Best Short Story in 2010 and Nebula Award nominations for Best Novella in 2013, 2014, and again in 2015. Some of his most popular writing deals with the ongoing adventures of a space-faring stage hypnotist named the Amazing Conroy and his animal companion Reggie, an alien buffalito that can eat anything and farts oxygen. His latest work is a very different kind of book, an anthropomorphic SF novel that explores prophecy, intolerance, friendship, conspiracy, and loyalty, and a drug that lets you talk to the dead.
Lawrence lives near Philadelphia with his wife, Valerie, who is neither a psychologist nor a Klingon speaker.