Empire of Dust: A Psi-Tech Novel Published by DAW

Have you ever day day-dreamed about getting an multiple book deal from a major publisher? Of having six agents fight over you? Of finally snagging the industry's top agent? Of getting a glowing review for your first novel in Publisher's Weekly?

Today, I invite Jacey Bedford onto my blog.  Jacey's novel Empire of Dust will be released on 4th November from DAW (Amazon UK, Amazon US pre-orders) and there are more books in the pipeline, no wonder Donald Maass were keen to represent her.

I'm taking notes. It couldn't have happened to a better writer, or a nicer person (Jacey's always been a writer who pays it forward).

Take it away, Jacey 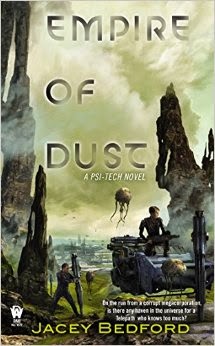 Trying to Stay Cool About the Book

The way it happened…

Wednesday 24th July 2013
Wednesday is Orange two-for-one cinema day with my cinebuddy and sometime band-mate, H. We go and see every science fiction and fantasy movie that we can find. Sometimes they are good. Sometimes… not so much. I can't even remember what we went to see on this particular Wednesday, but the experience of coming home to an email from Sheila Gilbert of DAW saying she was interested in the book I'd sent her a few months earlier was enough to drive all thoughts of movies out of my head. Sheila asked when she could phone me. It was six in the evening and I was just typing back to say I was in all day Thursday when I realised that it was still office hours in new York. So I emailed and said 'I'm back home now.' Almost before I'd hit send the phone rang.

And in an instant my life changed. Not only was I going to be published, but I was going to be published by DAW, an American science fiction and fantasy publisher which is part of the Penguin Group. A quick glance at my own book shelves reveals a high percentage of DAW books from Tanya Huff to C. J. Cherryh.

It would not be too much of a stretch to say that I've written all my life. I used to come home from school for lunch - at the age of six - and write a story before going back for the afternoon. I wrote my first novel when I was fifteen - well, six chapters, anyway - written out longhand and typed painfully on a borrowed Imperial 66, long before the days of auto-correct. It was a near future dystopia peopled with characters stolen from my favourite pop bands of the time. I've always favoured science fiction or fantasy. Whether it was blind ambition or ignorance of potential markets, I don't know, but I started writing novels, not short stories. In fact, I'd finished three novels before I wrote and sold my first short story in 1998.

So Sheila's offer for my novel 'Winterwood'--a historical fantasy--left me giddy with delight. So many writers try, and try, and try again, and are never lucky enough to land their manuscript on the right desk at the right time. When she asked me what else I'd got, I was over the moon. Good job I'd kept writing while I was searching for a publisher. She suggested I sent her two of my other finished novels (by that time I had seven) including my space opera, Empire of Dust.

Thursday 25th July 2013
At the time of the life-changing phone call I was between agents. I'd had two already. The first was long gone, and the second, whom I liked very much, had recently stepped sideways out of the agency game. Throughout May and June I'd been emailing prospective agents with varying degrees of success. Some had shown significant interest, but there hadn't yet been enough time for anything concrete to come out of the enquiries. Agents are busy and tend to take months, to wade through the submissions process. With a  deal on the table, however, I needed to resolve the agent issue quickly, so I emailed my top ten agent picks and sat back and waited.

Wednesday 1st August 2013
It didn't take long. I had six offers from agents on both sides of the Atlantic, each accompanied by a pre-arranged lengthy phone call. With much soul-searching, because there were two particularly brilliant offers that were very difficult to choose between, I went with my gut feeling and signed up with Amy Boggs of the Donald Maass Literary Agency. Amy's young and enthusiastic and she not only loves my book, but she's backed up by the might and experience of one on the biggest literary agencies in New York - and as a bonus they specialise in science fiction and fantasy.

So within a week of getting an offer for one book I had a new agent and shortly after that a publishing deal for three books. Sheila decided to start with the SF novel, Empire of Dust, a space opera. She asked me to write a sequel to that, Crossways, based on a one-page outline. And the third book out will be the first book that she acquired, Winterwood, a magic-pirate-adventure with a cross-dressing privateer captain, the jealous ghost of her dead husband and a wolf shape-changer (though please don't call him a werewolf or he'll get very upset).

Of course, that was only the beginning. Empire of Dust needed editing. Rather than cutting down I was very pleased that the editing process mostly included building up. I'd chopped out a lot of words to keep my first agent happy (the one that was long gone), but Sheila made suggestions that I was very happy to follow because it gave me the opportunity to restore things I'd taken out. I was lucky enough to get a face to face meeting with Sheila when we both attended World Fantasycon in Brighton in November, and she's a marvel to work with. She has great insight into character and world-building and under her careful guidance the book grew to 171,000 words.

Sheila commissioned Stephan Martiniere to do the cover and asked me to pick out a couple of potential scenes for Stephan to choose from, and to send visual details such as character and clothing descriptions, geography and equipment. And just like that, he nailed it. The cover is everything I could have hoped for, and more.

The last fifteen months have flown by. I've been editing one book and writing another from scratch, and now, at last, I have real honest-to-goodness books in my hot little hands. As I write this, the official publication day is just two weeks away, on 4th November 2014, but a box of promos arrived mid-October, and so did the first review. Publishers' Weekly said: " Bedford mixes romance and intrigue in this promising debut," and if that wasn't enough to put a smile on my face it finished with: "Bedford builds a taut story around the dangers of a new world.... Readers who crave high adventure and tense plots will enjoy this voyage into the future." Wow! I'll settle for that. I'm sure there will be stinkers as well (I've seen one star reviews on Amazon because the reviewer didn't like the colour of the envelope the book arrived in.) but the first one being positive means a lot.

Am I ready for the big day? I hope so.

Empire of Dust
Megacorporations, more powerful than any one planetary government, even that of Earth, race each other to gobble up resources across the galaxy, using as their agents the implant-enhanced psi-techs they have created. The psi-techs are bound to the megacorps, that is, if they want to retain their sanity.

Cara Carlinni, an implant enhanced telepath, goes on the run from Alphacorp when she uncovers corruption on a galaxy-wide scale. She thinks she has a breathing space, hiding out on a backwater space station. It's been almost a year, and her mind is still her own. But a ship arrives. Her past is catching up fast. Cara escapes with the help of straight-laced Ben Benjamin, a psi-tech Navigator for Alphacorp's biggest corporate rival. That's just the beginning, however. Betrayal follows betrayal as Cara and Ben are caught in a star-spanning manhunt, and if their enemies track them down, an entire colony planet could pay the ultimate price.

BIO
Jacey Bedford lives behind a keyboard in Pennine Yorkshire with her songwriter husband, Brian, and a long-haired black German Shepherd dog called Eska. She's had short stories published on both sides of the Atlantic and her first novel, Empire of Dust is out from DAW, part of the Penguin Group in the USA, in November. It's available via good bookshops and the usual online retailers. 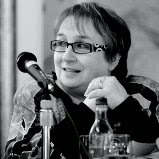